After receiving a bachelor’s degree in fine arts from the University of Kentucky in 1948, Zimmerman returned to Louisville and entered a painting in the Annual Kentucky and Southern Indiana Exhibition of Art at Stewart Dry Goods Store. The exhibition was judged that year by Katherine Kuh, curator of the gallery of art interpretation at the Art Institute of Chicago. She rewarded Zimmerman with first place for his painting Main St. Façade, which he described as “an abstract with a realistic subject” (Courier Journal 4/22/48). The painting was a formalized vision of main street buildings with several storefronts and a bright red lamppost. The prize money would allow Zimmerman to travel back to Paris, France, a thriving locus of artistic development after WWII.

Joseph Fitzpatrick, who would later work alongside Zimmerman on Arts in Louisville Magazine, recalled in an interview, how he saw Leo for the first time in years at the Air Devils Inn just prior to his return to France in 1948. The two shared several things in common; Fitzpatrick had also served in the military, each had been accepted into the Annual Exhibition of Art and both young American veterans were on their way to Paris, France to study art. The two remained in touch during their time over seas. Fitzpatrick described Zimmerman’s work ethic during his years in France as admirable, diligently striving to produce a painting a week. During a visit to a gallery in Paris, Zimmerman and Fitzpatrick had their initial exposure to avant-garde art, and since France had been always been a leader in setting new styles, they were both eager to be involved. They knocked on the door of abstract artist and secretary general of art at the Atelier D’Art Abstrait, Edgard Pillet, who would welcome them and act as a mentor and artistic collaborator. Later, Pillet would serve as an advisor and contributor to Zimmerman’s publication, the Arts in Louisville Magazine during a stint as artist in residence at the University of Louisville. 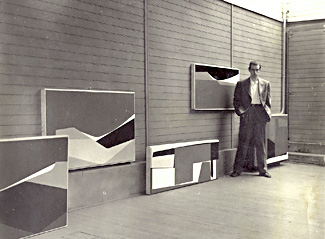 While in France, Zimmerman would also be invited to join La Groupe Espace, an association founded in Paris in 1951 by André Bloc and artists affiliated with the periodical Art d’aujourd’hui. He would mix with artists such as Victor Vasarely, Jack Youngerman, Ellsworth Kelly and close friend, Robert Breer.

In a letter to his parents dated February 16, 1953, Zimmerman describes his invitation to be part of La Groupe Espace, saying, “Pillet and Bloc… have asked me to become the American manager of [Art d’aujourd’hui] subscriptions in USA to spread the good word. Also they have invited me to join a group of Artists, Architects and decorators who call themselves La Groupe Espace. They want me to help establish an American branch. There exist in Belgium, Sweden, Denmark, and Holland already branch groups. The purpose is to foster closer cooperation between the various plasticiens.” In a later letter, dated March 11, 1953 Zimmerman describes the group’s purpose in more detail, “The Groupe Espace is an organization of artists and architects who are trying through common effort to bring a little closer relationship between the arts and their relation to la vie”

In order to supplement the allowance provided by the G.I. bill, Zimmerman took an entrepreneurial leap and began selling popcorn to the Paris public who were unfamiliar with the white morsels of crispy cooked kernels. Alongside Edgard Pillet, Zimmerman distributed his wares from the back of a beloved but dilapidated English pick-up truck to cafes and grocery stands throughout the city. By July of 1950, Zimmerman was selling about 2000 bags of popcorn a week for 25 francs a piece – or seven cents American—with a gross sales profit of about $140 dollars a week (From a Wrye Life: v1 b3 ch1 pg 6b, AP, 1950). Zimmerman also designed a sidewalk popcorn machine (which he convinced a French firm to manufacture), an industrial size popper and a bag sealer, the latter two of which were installed in an abandoned sculpture studio that doubled as the young artist’s make shift popcorn factory. Popcorn sales made it possible for Zimmerman to continue living and studying art in France without compromising his ideals saying, “I don’t hope to make a living at painting. You have to get into the schmook clique to do that. And I would rather paint for art than for people who like art because they think they ought to. I’ll keep on painting for art and make my living selling popcorn”. However, between the red tape involved in importing the un-popped kernels from Davenport, Iowa and difficulty with vendors stealing the profits, the operation eventually shut down. The old English pick up truck, which had hauled the popcorn, was sold to Victor Vasarely for one hundred dollars worth of francs.